“Lets swim together” event in the open waters of Caorle 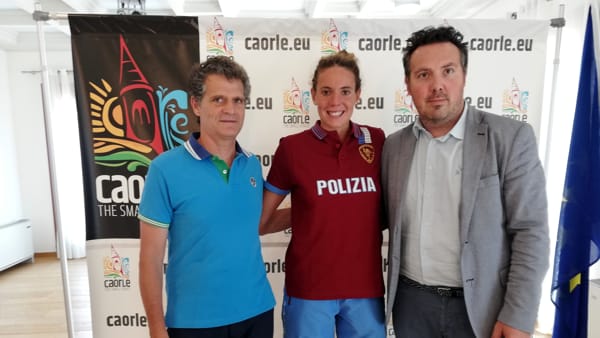 Lets swim together at Caorle, 14 July 2018 Events in Venice
On the weekend of 14 July 2018 the 17. edition of “Lets swim together” will be held, an open water swimming competition organised by the Fin Veneto regional committee in partnership with Caorle council. As usual, the theatre for the event will be the stretch of sea in front of the Levante Beach, where competitors of all categories (from beginners to national champions) and master (over 25) athletes will compete in a program of four different races (3 km, 5 km, 10 km and a Team Event, the team competition is 1500 m), all starting from the “Madonnina dell’Angelo”.

An important open water swimming competition, which has grown in number as well as stature due to thes many regional athletes, which today, in the specialty of long distance swimming boasts excellence of international importance. Yesterday, for the official presentation of “Lets swim together” to the press. Together with the Mayor of Caorle Luciano Striuli, the Councilor for Sport Giuseppe Boatto and the President of FIN Veneto, Roberto Cognonato, Barbara Pozzobon, 24 year old Fiamme Oro / Hydros was present, who took her first strokes in this race as a long distance swimmer and today is an example for the Italian national team athletes, as well as being the champion of the prestigious FINA Open Water Swimming Grand Prix.

Over the past decade registration to “Lets swim together” has grown to the point of making the event the biggest open water swimming competition in Italy, with an average of 900 participating athletes from associations all over Italy. Last year, for example, there were 930 swimmers competing, of which 560 amateur competitors and 370 national champions.

“Lets swim together” is the main stage of the “Upper Adriatic Circuit “, a series of five swimming competitions in open water in as many locations, in Veneto, Friuli Venezia Giulia and Lombardia. The Circuit, promoted and coordinated by Fin Veneto, has as its first stop on the calendar the XXIV Riviera Trophy of Trieste, which will be held on Saturday 30 June; then it continues on 14-15 July with “Lets swim together”, which will be followed on Sunday 22 by Lignano Open Water. On Sunday, July 29, however, there will be another historic race and new entry to the circuit, the Memorial Andrea Chimisso in the Lido of Venice. Finally, the last stop in Cremona for the Baldesio and Flora Trophy, a 3 and 8 km race along the Po river

Pennette with Treviso Chicory and walnut